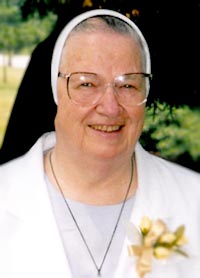 Sister Mary Laurence was born on May 17, 1929, in Covington, Kentucky. Ruth was the third of seven children born to Lawrence and Anna Budde. The family lived in Ft. Thomas, Kentucky, and Ruth attended St. Thomas Elementary School. After the eighth grade, she went to Notre Dame Academy in Covington. There she became acquainted with the Sisters of Notre Dame and entered the convent in her senior year. She professed her vows on August 10, 1949.

Sister Mary Laurence’s ministry was teaching, and as an educator she touched many lives. She began her teaching career as an elementary and high school teacher. Sister Laurence received her B.A. from Villa Madonna College in 1953, an M.S. in 1955, and her Ph.D. in 1958 from the Catholic University of America. That same year she began teaching at VMC/Thomas More College in the Biology Department where she was engaged for over 40 years. Many professionals in the area, as well as throughout the nation, knew Sister Mary Laurence as an outstanding professor of Biology at Thomas More College.

Sister was the recipient of several National Science Foundation grants. She received numerous awards including the A.D. Albright Award and the Sears-Roebuck “Teaching Excellence and Campus Leadership Award.” In 1981 she was appointed Dean of the College and Vice President for Academic Affairs, serving in that position until 1985. She retired in 1997 and was named Professor Emerita in Biology the same year. In 2004 Sister was chosen as one of the “Women Making a Difference” by Notre Dame Academy.

Another of Sister Mary Laurence’s accomplishments was the establishment of a biology station on the Ohio River for monitoring water content and for research. She served as its director for twenty years. In October 2011, the College named the outdoor classroom at the Biology Field Station in her honor.

Sister was actively involved in the SND community and has served in leadership positions at various times. Sister was elected as a delegate to the General Chapter in 1974 and a second session in 1975. Sister Mary Laurence had a love for the missions and after her retirement became the director of the Ugandan Mission Office at St. Joseph Heights.

At the time of her death, a former colleague gave this tribute. “She was a wonderful, caring, efficient administrator, completely dedicated to the College. Over the years I had many occasions to witness her personal attention to her students, making sure they sought to work to their fullest capacity, giving them sound advice, and guiding them toward their future.”

A Memorial Service for Sister Mary Laurence was held on Friday morning, August 2, in the chapel at the Provincial House, Covington. True to her calling as a scientist, Sister donated her body to the University of Cincinnati science program.

May she live in joy and peace in God’s loving embrace for all eternity.