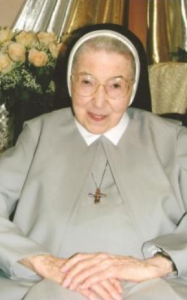 I am espoused to Him Whom the angels serve.

Born Leona Lucius to Charles and Susanna Moreo Lucius, she was the oldest of ten children and learned early in her life all about resilience and responsibility. She grew up in Delphos, Ohio and attended St. John’s Elementary and High School where she met the  Sisters of Notre Dame. At the age of nineteen, she entered the Sisters of Notre Dame and  on January 3, 1931 she received the name of Sister Mary Clarone.

After teaching second grade for only one year, Sister Mary Clarone assumed the role of Directress of high school Aspirants for 23 years (1941-1964). During this time she also taught at Notre Dame Academy. With the establishment of Notre Dame College Branch Campus at the Toledo Provincial Center in 1950, she also became part-time instructor on that faculty, later she was named Dean of the Branch Campus. Her thoroughness of instruction impressed all of the students who attended her classes.
In 1964 she was named the Provincial Assistant of the Toledo Province and also Director of Temporary Professed Sisters for 12 years. It was during these years that she and
Sister Mary Arthur searched, located, and purchased the land for the Lial Renewal Center and convent. By 1975 the convent, renewal center and school were constructed on the site and ministry flourished in Whitehouse, Ohio.

Throughout her life Sister Mary Clarone connected with many sisters, aspirants, vocation prospects and her family through letter writing. Her compassion and care for the
congregation, the world, the Church, and each individual was carried in her daily prayer and brought before the Eucharist. In her retirement years, as the first spiritual director of the province she tended the fire within others through retreats, conferences, and spiritual direction.

At the age of 100, because of failing health, Sister Mary Clarone became a resident at Rosary Care Center in Sylvania in 2011, and later moved to the Ursuline Center where
she died four days after celebrating her 102nd birthday with sisters and friends. Sister Mary Clarone entered into eternal peace in her year of JUBILEE OF PEACE celebrating her espousal to her faithful God for 80 dedicated years.