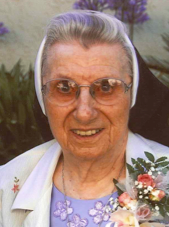 Sister Mary Anita was the eighth child of Joseph and Mary Jakob Hornack.  Sister remembered her childhood as among her happiest days and very family oriented with emphasis on religious values.  “When we sat down at the dining room table to do our homework,” Sister wrote in her autobiography, “my father would say: ‘Catechism first.’”

When Helen was a child the Hornacks moved to Cleveland, Ohio and Helen was enrolled in St. Ladislaus School conducted by the Sisters of Notre Dame.  From the age of five, Helen knew she wanted to be a teacher.  At the same time, Helen also felt called to be a “sister” for in her mind the two vocations were one.  In 1931, Helen became an aspirant; then the following year our Congregation, in which her older sister Veronica (Sister Mary Florette) was already a member.  Helen, now Sister Mary Anita, was professed on August 16, 1934 in Cleveland, Ohio.

The following September Sister Mary Anita began fifty-six years as a teacher and administrator first in Ohio and, beginning in 1963, in California at St. Rose of Lima, Maywood, St. Bernardine of Siena, Woodland Hills, and St. Mary Magdalen, Camarillo.  Throughout these years, Sister Mary Anita’s first concern was “to make things nice for the sisters both in school and in the convent.”  She “threw herself into the work of the house” — cleaning, arranging and decorating the rooms as well as planning surprises for the sisters.

At the same time, Sister was dedicated to education. In 2009, Arlene Stewart Verhague, a former student at St. Rose of Lima wrote: “Sister Mary Anita, you were such a tremendous model for all of us children.  We learned so much more than the ‘three R’s.’  We learned to be strong, yet caring, competitive but fair and to always show kindness.  I feel very blessed to have the opportunity to let you know what a positive force you were for me and I know for countless other students through your teaching career.”

In 1997 Sister Mary Anita was assigned to Our Lady of Assumption convent in Ventura where she served for the next five years.  In 2002, she came to Notre Dame Center to begin a new ministry; that of prayer.

During these years, Sister began a correspondence with Jesuit author James Martin.  In July 2014, Sister was looking forward not only her 100th birthday but also to the celebration of the 80th anniversary of her religious consecration.  Aware of the occasion, Father recently wrote:  “Sister, I am filled with joy at your generosity.  Think of all the good you have done, …how many, many lives you have touched, and, how wonderfully God has used you.  And it all came from [your] initial Yes…” Coincidently, Sister was currently reading his chapter about the Annunciation entitled “Yes” in his book Jesus A Pilgrimage when she quietly said her final “Yes” early in the morning of Sunday, March 23, 2014.  The celebration of Sister Mary Anita’s life and the Mass of Christian Burial will be held at Notre Dame Center, Thousand Oaks, on Saturday, March 29, 2014.  May she thoroughly enjoy her 100th birthday party in heaven.