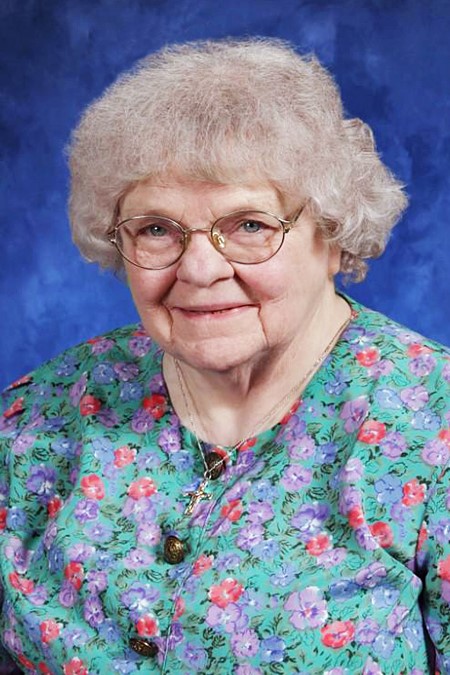 “You are the hands, the feet, the voice, the love of God.”

Geraldine, known as Gerry, was the third child born to John and Julia (McGing) Resley. Gerry was one year old when sadness visited the family: her mother died, and three years later, her oldest brother, John. She and her brother, Bob, lived with their grandparents until their father remarried eight years later. After graduating from elementary school, Gerry was given the opportunity to attend Notre Dame Academy in Cleveland. She loved her high school days, especially because of her association with the sisters who encouraged and guided her in following the longing of her heart to religious life. Gerry became an aspirant for her senior year and entered as a postulant on February 2, 1946. At investment she chose the name Sister Mary Alicemarie.

Sister’s entire life was one of service to others. In whatever ministry in which she was engaged – primary teacher, food service, librarian, assistant in the mission office – Sister was conscientious and adaptable, organized and generous, and had a heart for others shown through a caring, prayerful spirit. As a novice Sister was sent to teach the primary grades, but after eight years she responded to a greater need in the local convents for assistance with food service. For the next eleven years, Sister became quite proficient in the culinary skills of shopping, finding new recipes and preparing delicious meals for the sisters.

In 1971 Sister was asked to resume her ministry in the classroom. While teaching every day, she completed her own studies and earned a bachelor’s degree from Notre Dame College in South Euclid, Ohio. Teaching second grade and preparing her students for the reception of the sacraments was always dear to her heart. She was meticulous yet always attentive to the needs of the children, approaching them with a warm and welcoming presence.

When Sister Mary Alicemarie moved to the Provincial Center in 1997, she began ministry in the Notre Dame India Mission office. She wanted to get involved in the spirit and the scope of our missionaries and their work in India. Using her gifts of organization and compassion, Sister helped to organize, price and sell craft items from India and, up until two years ago, wrote and sent out birthday cards to donors. A listening ear and a promise of prayer characterized each of the follow-up phone calls. It was a special touch to extend and share God’s love with others.

Sister Mary Alicemarie died as she had lived—quietly and gently. Since early childhood, Our Lady was treasured as a very dear friend, Sister’s guiding star in life. May she know peace and joy in the eternal presence of Mary and our loving God.