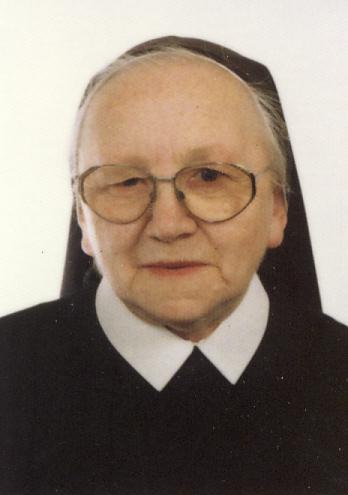 Sister Maria Theresia was the sixth of the seven children born to Raimund and Anna Glasmachers. Since her father was a post officer, he was well-known and very popular in and around Grefrath. Together with her siblings, she spent a carefree childhood, marked by the simple and joyful atmosphere of the Lower Rhine area and embedded in the catholic milieu of her parental home and of the parish. After completing the basic primary and secondary school in 1935, she worked in her parental household until 1945. These years were only interrupted by a mandatory year of service on a farm and a one-year labor service, which were both required by the state.

From her early childhood on she knew the Sisters of Notre Dame who ministered in her hometown and in the surrounding villages. In 1944, she acquired the Missio Canonica with the sisters and in 1945, she assisted first in the kindergarten for refugee children in Vinkrath and from 1949 to 1967 in the kindergarten in Grefrath, which were both run by the sisters of Mülhausen. At the same time, she took loving care of her parents and her siblings, who loved visiting their parental home with their families.

Her father died in 1958 and after her mother’s death in 1967, Anni – as everybody called her – fulfilled the wish of her life and entered the Congregation of the Sisters of Notre Dame at the age of 46. She knew the sisters “outwardly“ very well, but the step into religious formation with many new impressions, customs, rules, and prescriptions was not easy. In faith and with joyful simplicity and serenity she continued her journey and made her first profession in 1970.

Since all her life had been marked by care for others, especially for children, she became an assistant in a group of small children in the children’s home in Baesdonk near Geldern from 1970-1972. Then she became a co-worker and group leader at Haus Maria Helferin, a psychiatric hospital for children in Leuth. There she ministered until 2005. When the sisters had to leave this ministry in 2005 because of their age, she moved to Haus Salus where she offered some smaller services as long as her strength allowed it. Finally, she accepted all the assistance of her co-sisters and nurses with joyful gratitude.

Sister Maria Theresia enjoyed life and had a good sense of humor; she quietly and readily accepted the joys as well as the burdens of each day.

She lived her vocation in simple and deep faithfulness. She enjoyed the community prayer as well as her private prayer where she encountered God in silence. She loved playing Canasta, which was part of her daily routine. She also liked celebrations.

All her life, she remained closely connected with her family and her hometown Grefrath. The last months of her life were marked by increasing weakness and pain. She was grateful for all the assistance and affection she received and in the evening of 19th July, she quietly gave her life back into the hands of our good God. We thank Sister Maria Theresia for her love, her simplicity and her dedication. May she now enjoy the fullness of life in the embrace of our good God.