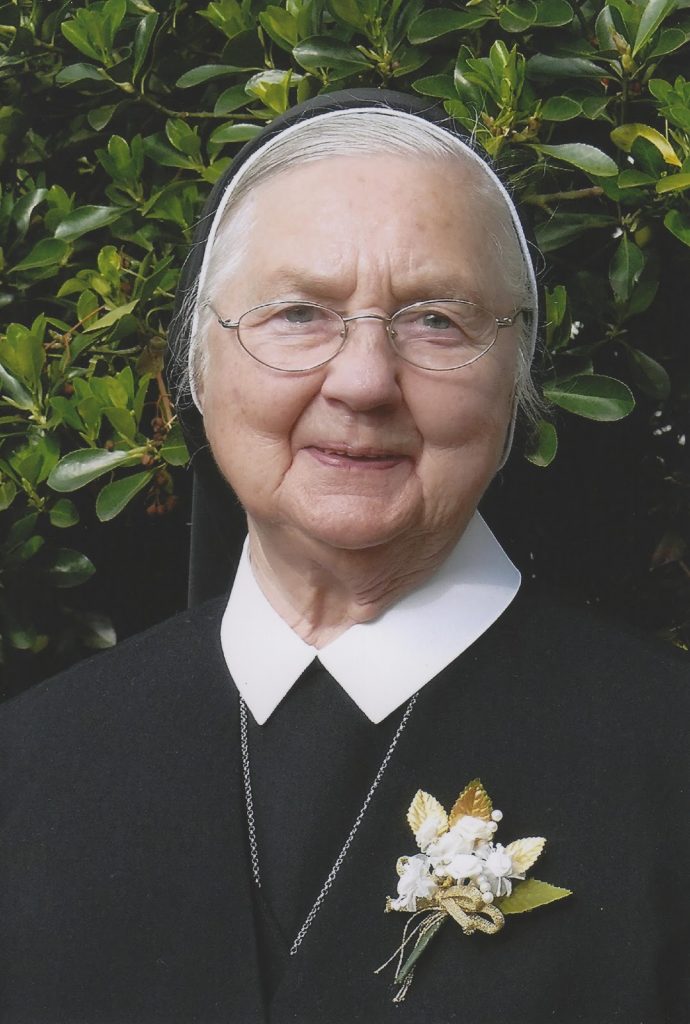 On St. Stephen’s Day, Sister Maria Tarcisia became the second co-sister in the community of Haus Salus in Mülhausen who was called home by God due to the corona virus.

Sister Maria Tarcisia was the fifth among 11 children of whom eight are already deceased. Although Sister grew up during the difficult time of the “Third Reich“, she experienced protection and security in her big family. The parents practiced their faith according to the down-to-earth and sober way of life in Westphalia.

On 15 August 1951, Sister Maria Tarcisia began her novitiate in Mülhausen. Her natural sister Theresia, Sister Maria Bernhild, followed her five years later into our Congregation and entered in Coesfeld. The day of Sister M. Tarcisia’s first profession in 1953, which was to be a great feast for the whole family, was overshadowed by a tragic accident. On the car ride to Müllhausen, a serious accident happened, in which her eldest brother and her youngest sister died; another brother and our later Sister Maria Bernhild were seriously injured.

After her training as a kindergarten teacher, Sister Maria Tarcisia ministered in the nursery schools and day care centers in Düsseldorf and Duisburg-Marxloh. She was an educator by nature; she also maintained close contacts to the parents of the children. Sister was appreciated because of her joyful, uncomplicated way of life, and as principal she was mindful of good teamwork. She also maintained frequent contacts to her family and to her many friends and acquaintances. Family members and friends asked sister for advice and they felt that their concerns were in good hands with her.

In 1997, Sister Schwester Maria Tarcisia moved to Haus Salus; here, too, she readily got involved in the community in many different ways. Until her old age, she was interested in what was happening in the church and in the world. She was keen to be up to date through versatile reading; the issues of the church and the world were included in her prayers.

Her faith, founded in her parental home, carried her throughout her long life and also helped her to accept the infirmities and limitations of old age calmly by saying YES to them. She maintained her joyful and benevolent nature and was grateful for all signs of affection and help.

According to her wish, she was dismissed from the hospital on Christmas Eve. In this way she was able to attend holy mass on TV on both Christmas days. Due to Corona, only her Sister M. Bernhild and Sister M. Hadwigis were allowed to visit her; on one of these visits, she prayed the Lord’s Prayer loudly and clearly and at the end she added, “Jesus shall call me! “God fulfilled this wish in the late evening of the second Christmas day. Now we know that she is safe in God’s hand.