Province of Our Lady of Good Counsel, Jakarta, Indonesia 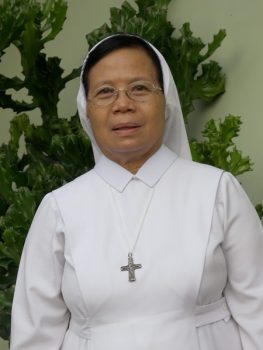 “How good is the good God” (St. Julie Biliart)

Sister Maria Syaloma was born on January 9, 1948 in Klaten to the couple of Tarusiswoyo and Rahayu. They named her Murniningsih as the second child in the family. Her older brother had passed away when he was a little boy. Murniningsih lived with her parents and the other siblings, 2 younger brothers and one younger sister. Murniningsih was baptized on May 24, 1958 and received the name Yosefin. She received the Sacrament of Confirmation on October 17, 1960.

Murniningsih’s youth was marked by her desire to become a nun which brought her into the Congregation of the Sisters of Notre Dame, where she became a postulant on October 15, 1968. With her investment on July 8, 1969, she received a religious name: Sister Maria Syaloma. Some years later, the youngest in the family, Regina, followed her footsteps into Notre Dame. This is Sister Regina Maria.

The initial formation period helped her grow in her vocation. This showed her spirit of being a passionate and persistent religious by practicing the virtues that made her grow in her spiritual life. Sister made her first profession on June 29, 1971, and the day after, she was missioned to teach religion in the St. Anthony Junior High School which belongs to St. Antonius Parish, Bidaracina, Jakarta. In addition to teaching religion in school she was also doing pastoral catechesis in the parish.

Sister Maria Syaloma was a person of prayer: diligent, disciplined, loyal, firm, generous, creative, responsible in doing her tasks. She loved St. Julie Billiart very much and she made an effort to live out our charism every day: “How good is the good God.” She realized that only by the grace of our good God her first desire to be an SND would come into reality. Sister made her final vows in October, 1976. Most of her life she was active in education – either teaching in the formal schools, parishes, in the novitiate or accompanying the aspirants. However, Sister had many other talents: painting, composing songs, crafts, writing articles and photography.

Sister Maria Syaloma, until the last moment, was working full-time in the communication and publications department of the province. She was in charge of SENADA – the province communication, and the Central Library. Pekalongan was the last abode for her.

Sister’s health declined since May 26, 2018 and she was hospitalized in Budi Rahayu Hospital and received the Sacrament of the Sick. She united her suffering with that of the Virgin Mary and went home to God at 05:32 in the morning on Wednesday, June 13, 2018. Sister was summoned by God in RSU Budi Rahayu Pekalongan. May you rest in peace, dear Sister Maria Syaloma, and don’t forget to pray for us who are still working in His Kingdom here on earth.