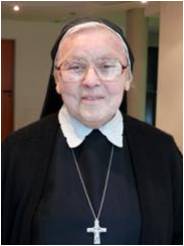 Sister Maria Lutgardis, Elisabeth Vreman, was the oldest child of Johann and Elisabeth Vreman, born Giesen. Her father was Dutch and worked as a skilled worker in one of the many textile processing factories in Bocholt. Together with her two younger sisters she grew up in an environment marked by the catholic faith. At an early age, she came into contact with the Sisters of Notre Dame.

Elisabeth attended the catholic primary and secondary basic school and then she started an apprenticeship as a seamstress. Since all the children had the Dutch citizenship because of their father, it was very difficult for them to attend high schools or to receive any further professional training during the time of National Socialism.

Until the end of the Second World War, Elisabeth worked in different enterprises as a seamstress, e.g. in a sewing room of the Wehrmacht, and she attended a course where she received the Missio canonica. In 1946, she was offered a job as an assistant in a parish nursery school where she worked with the Sisters of Notre Dame until 1950.

On July 01, 1950, she responded to God’s call by entering our congregation in Mülhausen. During her novitiate, she acquired her intermediate graduation certificate and passed the examination in home economics which was necessary for the admission to training in a social job. After her profession, Sister Maria Lutgardis attended the college for nursery teachers in Oedt from 1953 to 1955, and then she ministered in the children’s homes in Geldern-Baersdonk and Hüls as a group leader.

For 14 years she was the group leader of a group of handicapped girls at Vinzenzheim in Aachen. Then she was responsible of the refectory there for further 19 years and in 1993, she was transferred to Haus Salus in Mülhausen. For 11 years, she ministered in the ward kitchen in the New Builing 1, where she took care of the meals for elderly and sick sisters.

From 2004 on, her physical and mental abilities were failing more and more. After having cared for children living in institutions, for handicapped children, and for her co-sisters all her life long, she herself now became more and more dependent on the help of others.

Sister Maria Lutgardis was a calm, unassuming sister who was quiet and unobstrusive in her spiritual life as well as in her ministries, but who was very attentive and caring for others and who placed herself and her ministry into God’s good hands. Besides her work, she accompanied the children entrusted to her with great interest and she later visited the sisters in their rooms in Haus Salus where she gladly offered her services. She had always maintained loving contacts to her family and looked forward to her visits in her home town Bocholt.

During the last years of her life, dementia took all her physical and mental abilities but she never lost her hearty laughter and the vivacious, non-verbal manner in which she connected with her environment. Her friendliness was a special gift for her co-sisters and nurses. When God called her home in the evening of July 13, it was a relief and the fulfillment of her longing for Sister Maria Lutgardis.