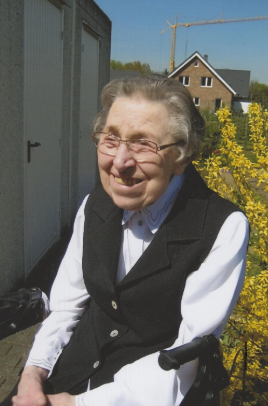 “In death, our life slips away, but it only falls from one of God’s hands into the other”.
(We found these words in her handwritten curriculum vitae)

First, we read what Sister Maria Laurina wrote herself:

“Born on 18. November 1927 in Maffersdorf, County Reichenberg (Sudetenland), I grew up in the security of my parental home with my five years younger sister, attended elementary school for five years and then the so-called citizen’s school for three years. Due to my father’s early death, my mother had to run our business (wood and coal) and our small farm alone with my grandmother. Then the Second World War started, and the situation became more and more difficult, so that we children had to share the concerns and needs. Due to the lost war, we were expelled. On 15 July 1945, the Czech Gestapo ordered us to leave everything within three hours – except some hand luggage – and trucks took us into the interior of the Czech Republic where we had to help the farmers in the fields as detainees. 14 months later, shortly before the winter began, we were taken to Saxony-Anhalt (occupied by the Russians). Due to overpopulation, people were not pleased to see us and we had to eke out a living under hardest conditions.

Due to the early death of our beloved mother, we came to relatives near Koblenz in West Germany in 1950. Through the priest of the town, I got to know the Sisters of Notre Dame, who ministered in the orthopaedic clinic in Engers at that time. In 1953, I entered in the then Provincial-Motherhouse in Mülhausen. During the novitiate, I graduated in housekeeping and then I started my formation in health care. After the state exam, I ministered in Engers. Since the clinic needed a physiotherapist, I studied physiotherapy and after passing the state exam two years later, I ministered in that special area. In 1981, I moved to Bonn, Haus Maria Einsiedeln, to take care of senior citizens. 6 years later, I was transferred to Mülhausen, Haus Salus, where I sought to help and accompany our elderly and sick sisters wherever I could”. So far Sister Maria Laurina herself.

Sister lived her religious life in genuine and close union with God. During her active life, Sister Maria Laurina did not spare herself but was fully committed to her ministries. This, however, did not prevent her from actively contributing to our community on feast days. Her witty and humorous contributions at carnival, e.g., were highly appreciated.

Her last long and serious illness did not correspond with her ideas. She wanted to be torn right out of life and work. It was not easy for her to bear health restrictions, reduced eyesight, reduced hearing and physical infirmity.

It was very painful for Sister Maria Laurina that God had called her younger sister home before her. She felt closely connected with her relatives and with our collaborators and was interested in their lives.

In her notes it says, “I am eagerly expecting my last day and I hope that God will welcome me in His merciful love.” We believe that she has found her security and home there now.