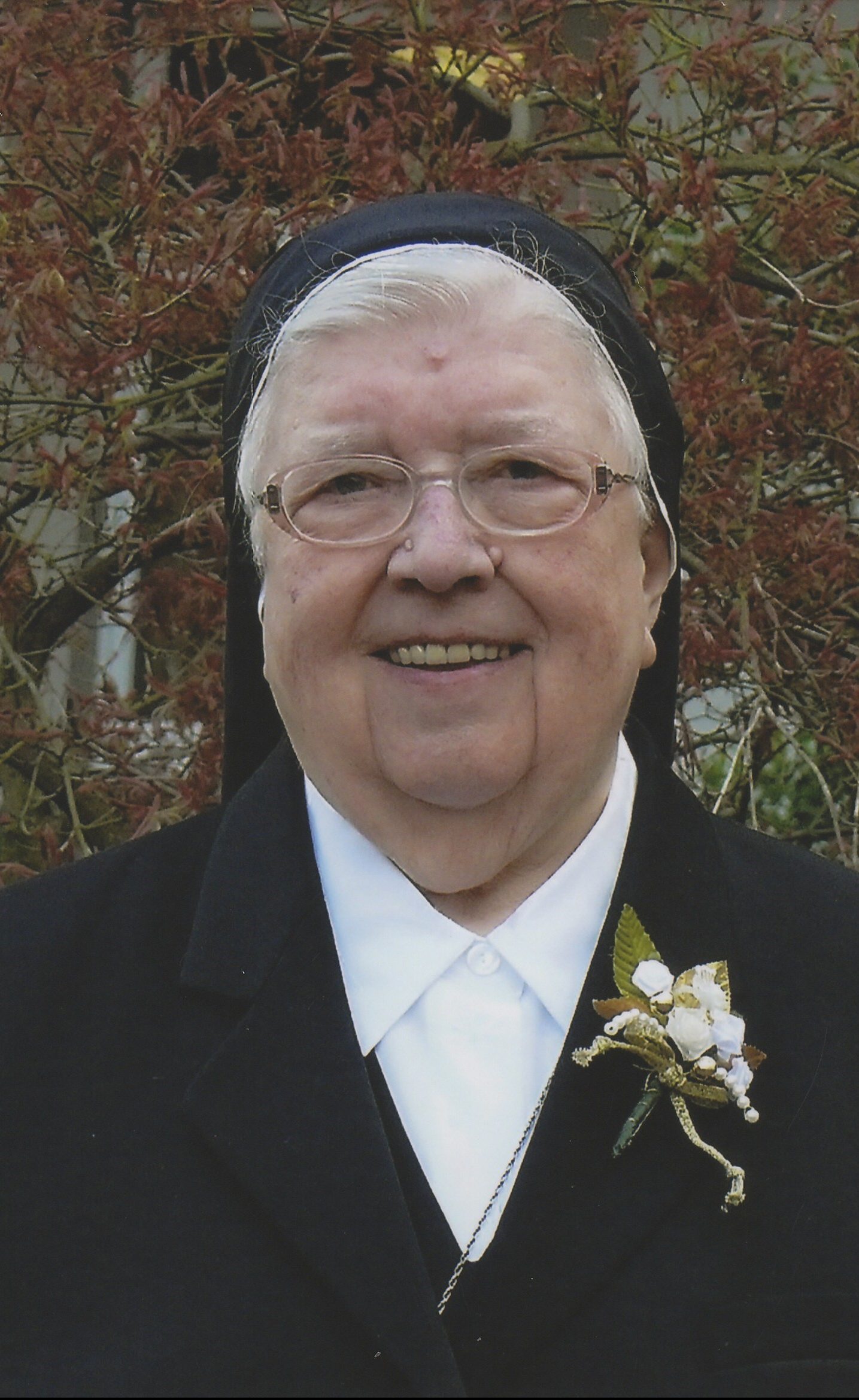 “All for the greater glory of God!”

Karola Feltkamp was the eldest of the four children born to the master painter Josef Feltkamp and his wife Johanna. She spent her earliest childhood years in Coesfeld and was enrolled at Jakobi-School in 1937. When her father took over her deceased grandfather’s business in 1939, the family moved to Neuenkirchen near Rheine, where Karola continued basic primary and secondary school, which she completed in 1945. The childhood and youth of Karola and her siblings were marked by the worries and anxieties of World War II and the post-war years, which were times of hunger, need, bomb attacks and reconstruction. Trust in God and the solidarity of the family helped to live through these difficult times.

After finishing school, Karola completed her mandatory year in housekeeping and in 1946 she started an apprenticeship as a knitter, which she successfully finished with the final apprenticeship exam in 1949. Until 1951, she worked as a mechanical knitter and then she started a training in housekeeping with the Sisters of Notre Dame at St. Joseph High School in Rheinbach. During her collaboration with the sisters she realized her wish to follow God’s call into our congregation.

After her final vows, she trained as a childcare worker at St. Irmgardis in Viersen-Süchteln. Then she worked in the children’s home in Hüls for six years. From 1968 to 1983, she was in charge of different tasks at Vinzenzheim in Aachen, such as cafeteria, care for guests, food storage, and co-workers. From 1983 to 1992, she was local superior and manager in Haus Salus in Mülhausen and then, until 1997, in Haus Cäcilia in Bonn. During that time, she received the qualification as a senior home manager at Meinwerk-Institute in Paderborn. In Bonn she had the difficult task to close the senior home, Haus Cäcilia.

For four years, Sister Maria Lamberta was the coordinator of the housekeeping in Mülhausen and in 2002, she became the local superior of the care-dependent sisters in St. Julia, Haus Maria Einsiedeln in Bonn. This living area was closed in 2007, but Sr. M. Lamberta found a new ministry as a contact person for the residents of the assisted living area connected with the senior home.

Sister Maria Lamberta spent her retirement in Haus Salus in Mülhausen. She loved doing fine handcrafts, taking photos, and designing cards for sale for the missions or as gifts. Sister Maria Lamberta loved the community. She was sociable and outgoing, friendly and ready to help, she loved celebrating and was active in organizing festivals. But she also loved praying in community and silent times in the chapel. She maintained close contacts with the families of her siblings by home visits, letters and phone calls.

During these last days, her physical strength decreased; walking was especially difficult for her, but until three days before her death, she was still in chapel and at meals. She wanted to cure a severe cold in her room, but the good God had other plans. In the early morning of October 17, God called Sister Maria Lamberta home while she was asleep.

May God bless her lifelong care for the people entrusted to her and may he welcome her in his glory!