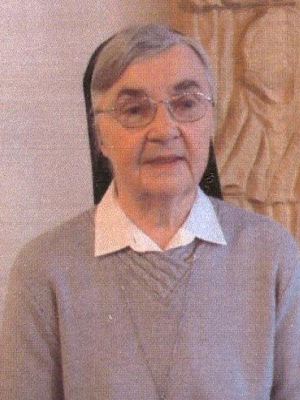 Maria was the third of the six children born to Franz and Franziska Schultewolter née Epping. After completing basic primary and secondary school, Maria worked as a seamstress until she learnt housekeeping at the Liebfrauenhaus in Cologne.

In 1954, when she was 20 years old, she entered our Congregation. At her investment, she received the name Sr. Maria Irmingardis in remembrance of her sister Irmgard, who died as a little child. After her first profession, she ministered for 10 years in various kitchens. During her time in Cologne, Sr. M. Irmingardis attended the college for housekeeping at the education center for women in Cologne-Braunsfeld.

In 1968, she was entrusted with a group of 15 to 17 -year-old boarders at the vocational school in Geldern. To develop her pedagogical skills, she attended the College for Social Pedagogy in Vechta from 1974 to 1976 and graduated as a certified educator. After that, she ministered in different boarding schools. Sister Maria Irmingardis always treated the students entrusted to her in a respectful way. She loved social gatherings and singing together. Her guitar was her faithful companion; it helped her to easily create a happy atmosphere. She stayed in contact with her former students as long as she was able to.

At the age of 65, Sr. M. Irmingardis changed from ministering to the youth to working with seniors. She prepared herself for this new ministry by attending several courses. First, she ministered as a pastoral worker for senior citizens in Duisburg-Marxloh. When the convent there was closed, Sister moved to Hürtgenwald-Vossenack, where she ministered as a pastoral and social worker at the Geschwister-Louis-Haus for 15 years. Sister treated the elderly with great love and soon won their trust and confidence. Maintaining contact with the families of the residents, especially those suffering from dementia, was very important to her. She succeeded in creating a happy atmosphere and in fostering a sense of togetherness by singing with the elderly and by playing the guitar.

All the employees, especially the social workers, appreciated Sr. M. Irmingardis. She had a good sense of humor and joined in with everything. During the preparation of many feasts, her ideas contributed to the program as well as to the decoration. She always “had to“ fold the napkins, which she did with great creativity.

She prepared many very different prayer services; she knew how to motivate the residents by involving them already in the preparation. She accompanied many residents on their last way and then prepared a touching funeral service.

First signs of dementia, which she herself did not recognize, led to her transfer to Haus Salus in 2013, which was very difficult for her. Apart from increasing dementia, she suffered from another serious disease so that she was completely bedridden during the last two years.

On the feast of the holy Guardian Angels, God made an end to her her suffering. In an antiphon of the feast it says: “God has sent his angel und saved his servants who trusted in him.”

We believe that this has become reality for Sr. M. Irmingardis.