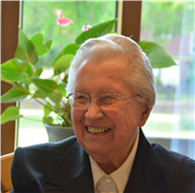 Sister Maria Hubertien was the second youngest child of Peter Hubertus van den Bosch and his wife Maria Catharina Geurten. The family consisted of 12 children, 5 boys and 7 girls.  Sister M. Hubertien was a cheerful and intelligent child, who attended primary school, advanced elementary education (Mulo) and the school for domestic science (Huishoudschool) of the Sisters of Notre Dame in Hoensbroek.

Subsequently, she became a kindergarten teacher and worked as such for a few years before entering the Congregation at Tegelen. After her profession she obtained her teacher’s certificate and secondary school teaching certificates in German and English.

She worked at the school in Velp for just over a year and then moved on to the Ulo (advanced primary education) in Heerlen and Hoensbroek.

Then she was asked to take on the ministry of novice mistress, which she performed with great dedication.

In August 1968 she became assistant to Sister Maria Rainelda and, subsequently, was appointed treasurer. It was a role she was cut out for.

She had a businesslike mentality and a feeling for construction work. This enabled her to realize a number of changes to our old convent building. During her time in office a large amount of construction work needed to be done, which was necessary in order to turn the old convent and boarding school into living spaces for the aging sisters who came to Tegelen from various other convents of Notre Dame. One of the sisters mentioned Sister M. Hubertien’s actions in a text on the occasion of Tegelen’s 125th anniversary in 2016, in which she referred to her as the “construction priest”. In 1983 Sister Maria Hubertien became Provincial Superior and had the opportunity to continue carrying out her plans, which she did.

Yet despite all her daily concerns, she certainly did not forget the spiritual life.

In her letters she regularly repeated that being faithful in prayer was very important and being good to each other was the cornerstone of community life. As it happens, she was a very gregarious person herself and playing cards was one of her big hobbies. Even during Chapters she never missed an opportunity to play cards in the evening.

In recent years, she did not do very well. She started to forget things and during a conversation she sometimes couldn’t find the right words, which bothered her profoundly. In the week before we were to celebrate the 65th anniversary of her profession, Sister M. Hubertien fell and broke her hip. This would prove to be fatal to her. She did not recover. She said she wanted to go to the Lord, to whom she had, after all, devoted her work of many years, and He fulfilled her wish.

We thank God for the rich life of Sister Maria Hubertien, who now sings the praises of God in the great choir of all the Sisters of Notre Dame.