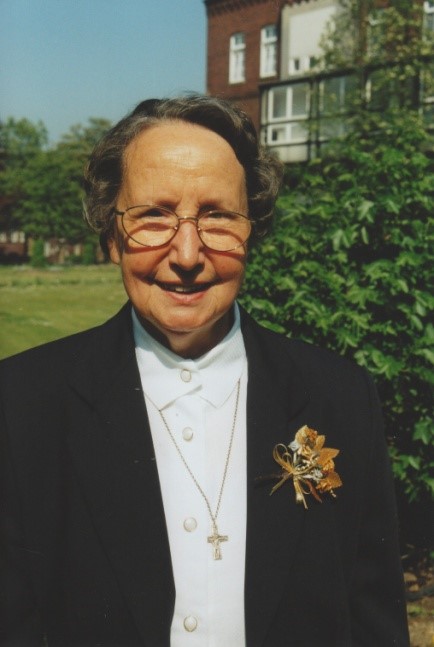 For many years, Sister Maria Hildgart has been anticipating the last phase of her life and has determined in writing: “I wish that no traditional obituary be written about me. The most important biographical dates and facts are sufficient”.

Now we read what Sister M. Hildgart has written herself:

“Sister M. Hildgart had two younger siblings, a brother and a sister. Her father was an officer in the German Air Force and was killed in Warschau in the Second World War at the end of 1944. Because of her father’s profession, the family moved to Essen in September 1939, where they were completely bombed out in March 1943. From 1943 to 1948, the family lived in the Bergisches Land.

Because of a lengthy illness of her mother and the turmoil of war, Sister M. Hildgart attended four basic primary and secondary schools from 1939 until 1943. From autumn 1944 to summer 1946 school attendance was not possible. To make regular school attendance possible, she was sent to St. Joseph boarding school in Rheinbach, where her aunt, Sister M. Georgia, was a teacher and head of the boarding school. There she took her Abitur in March 1953. Meanwhile, her family had moved to Cologne, the hometown of Sister M. Hildgart’s parents.

In August 1954, Sister entered the Congregation of the Sisters of Notre Dame in Mülhausen. On 13th April 1955, she was invested and on 23rd April 1957, she made her first profession and on 16th July 1962 her final vows in Rome.

From 1957 to 1962, Sister M. Hildgart worked in a group at the boarding school in Mülhausen and in 1962, she was one of the first sisters to be sent to the newly established St. Joseph Province in Rheinbach. From 1962 to 1968, she studied theology and English language and literature at the university in Bonn. She did her shortened teaching practice in Cologne-Porz. From 1968 to 1972, she was a teacher at Notre Dame School in Bonn and from 1972 to 1998, she taught at St. Joseph Grammar School in Rheinbach. After her retirement, she did a lot of social work in Rheinbach and she stayed there even after the convent was closed in 2007”.

Thus far the biography written by Sr. M. Hildgart herself.

In 2014, serious physical disease and progressive dementia made a transfer to Haus Salus necessary. That was a crucial change in her life. Specialist treatment had good effects so that her physical conditions stabilized.

At the beginning of 2019, a general deterioration of her health occurred and made hospital stays necessary; her last stay was very short because medical help could not promise success anymore. During her last days in Haus Salus, Sr. M. Hildgart was completely dependent on help; she was unable to leave her bed. Her wish not to be left alone, which she had often repeated, was fulfilled by the care of the nurses and the presence of the sisters.

In the late evening of August 29, God released her from all her suffering and fulfilled her longing for home and security.