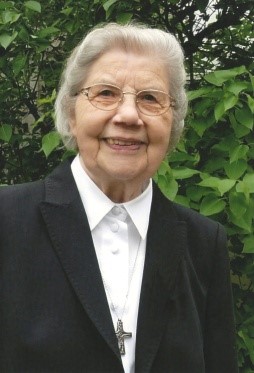 The dates in the life story of Sister Maria Hildegundis are easy to recall: She was born on May 7, 1926, grew up in a big family in the Emsland, and entered the Congregation with her sister Hedwig in Mülhausen in 1949. After completing her religious formation, she studied German and English at the university in Bonn to become a high school teacher. Besides working full-time, she acquired an additional qualification in theology. From 1966 to 1993, she was a teacher at the Liebfrauenschule in Cologne, and from 1997 on she was the local superior of that community for almost twenty years. For several decades she also used her excellent cooking and baking skills for the good of our community in Cologne.

Teachers, students, and parents appreciated her professional expertise, her pedagogical skills, and especially her wide heart and her good humor. We, her co-sisters, thank her for her goodwill, her discretion, her commitment, her cheerfulness, and especially for her deep spirituality.

With the death of Sister Maria Hildegundis, all three Sisters of Notre Dame from the Eilers family–Sister Maria Brigitta, + 2006; and Sister Hedwig Maria, + 2013– have now completed their lives in God. Although her two sisters served in different ministries, they remained in close contact with Sister Maria Hildegundis. This was also true regarding her big family. We had the impression that Sister Maria Hildegundis became more and more a center who kept her siblings and the following generations together. That became especially obvious when we celebrated her ninetieth birthday last year. The big family gathering in our convent in Cologne was like a harvest festival that united the Eilers family and also gave the sisters and the school community the opportunity to express their gratitude.

We could not celebrate her 65th jubilee because on April 28, 2017, Sister suffered a serious stroke, from which she did not recover. She spent the last weeks of her life in our infirmary, Haus Salus. As long as she was able to, Sister Maria Hildegundis expressed her gratitude and her contentment until she was redeemed from her illness and peacefully went home to God in the evening of the Feast of the Sacred Heart.

Sister Maria Hildegundis loved the musical setting of Psalm 91 by Felix Mendelssohn-Bartholdy, and we are sure that the promise, “He will give his angels charge of you to guard you in all your ways…“ has now been fulfilled for her.