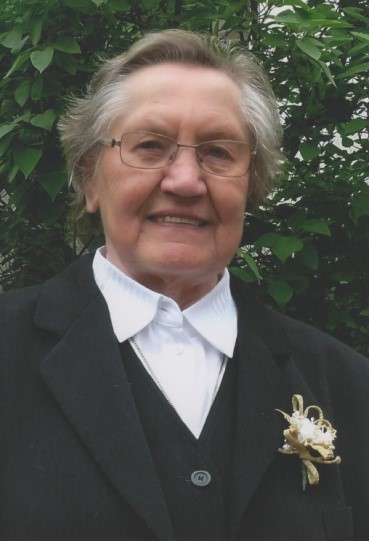 Hedwig Brockhaus was the seventh of the nine children born to the farmer Hermann Brockhaus and his wife Gertrud. In the Catholic Münsterland, she and her siblings spent a happy youth. She attended the Catholic basic primary and secondary school in her hometown Nienborg. During her last two years at school, she lived in her aunt’s family in Altenberge near Steinfurt.

From childhood, Hedwig had been used to helping with the work on her parental farm because her brothers and all the employees were drafted into the army during the Second World War. In the winter months, she attended the agricultural college in Ahaus and from 1947 to 1949, the housekeeping school at the Liebfrauenschule in Mülhausen.

There she met the Sisters of Notre Dame and she felt the call to dedicate her life to the service of God and of the Congregation. On 1 September 1949, she began her religious formation in Mülhausen and in 1952, she took her first vows.

Sister M. Gertraudis loved domestic work and since she was an excellent cook, she ministered as a kitchen manager all her religious life. To improve her skills, she took part in a housekeeping course at the agricultural college in Geldern from 1969 to 1970, which she successfully completed. That enabled her to educate apprentices who were entrusted to her especially in Mülhausen and Ratingen.

From 1972 until her transfer to Haus Salus in 2009, she lived and worked in Ratingen, where she took care of the physical well-being of the sisters, boarders, guests, and temporarily also of the children in the kindergarten. When the convent in Ratingen was closed in 2009, Sr. M. Gertraudis left the familiar domain of her ministry with a heavy heart and came to Haus Salus in Mülhausen.

At the beginning, settling in was hard because she missed the students, the good contacts in the house and the urban environment. But she was still able to assist with smaller services, she loved doing needlework, and she maintained good contacts with her co-sisters and our collaborators. She loved nature and she watched the change of seasons with great interest. She was happy to find a faithful volunteer who first took her for walks and who later took her out in a wheelchair. She also remained closely connected to her family until the end of her life.

Sister Maria Gertraudis was a quiet woman of prayer who drew her strength from the daily Eucharist and from the encounter with God in the community of the sisters and in private prayer. She enjoyed participating in the celebrations and special programs of the community.

In recent years, her strength kept decreasing. She became more and more infirm and needed assistance. She patiently bore her infirmities and was grateful for all the assistance which she received from co-sisters and nurses.

In the morning of 25 June, God released her from her cardiovascular diseases and her severe pneumonia by quietly calling her home.

We thank Sr. M. Gertraudis for all the good she has done to us and to many people and we pray that she may now rejoice forever in God’s loving embrace.