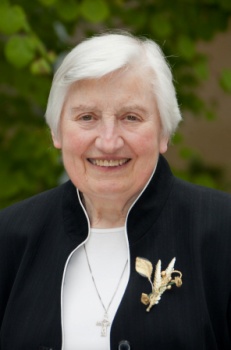 Gertrud Diecks grew up with 5 siblings on their parental farm. Her parents were Otto Diecks, a farmer, and his wife Antonia Diecks, née Beer. After completing basic primary and secondary school, Gertrud helped her parents on the farm. That time was interrupted by a year that she spent as an apprentice cook with the Sisters of Notre Dame at the Klausenhof in Dingden. In April 1962, she attended the seminar for spiritual welfare in Münster, but then she decided to enter the Congregation of the Sisters of Notre Dame in Coesfeld.

On August 18 in 1963, she received the habit and the name Sister Maria Ermenhild. After her profession in 1965, she ministered at the boarding school in Nottuln where she also obtained the secondary school certificate. In September 1970, after ministering at the boarding school in Ahlen for some time, she enrolled again at the Seminar for Ministry and Catechesis in Münster. From 1972 to 1988, she ministered in the parish of Vreden and then, until 2005, in the parish of Gescher-Hochmoor.

She did her pastoral work with great dedication, joy, and openness towards people. This ministry was really her vocation. Many lasting contacts bear witness to Sister Maria Ermenhild’s great commitment. With a heavy heart, she said goodbye to her beloved ministry when she was 67 years old.

Since a job as sacristan had just become vacant in the parish St. Martini in Münster, she was happy to take over thist task. It was a welcome continuation of her previous ministry since she had already served as sacristan in Hochmoor. In spite of physical limitations caused by rheumatism, she managed to do the necessary work. She simply took more time or she found voluntary helpers when her physical strength was failing.

At around Christmas 2012, she was diagnosed with cancer and the doctor in Coesfeld clearly explained to her that she would only live for some more months. She could say “yes” to this diagnosis. In April 2013, she gave up her job as sacristan at St. Martini. But then something happened that even the doctor considered a miracle. She recovered after chemotherapy and lived for two more years during which she was always thankful for this gift of life.

In the fall of last year, she fell ill again. She was ready to accept again chemotherapy, believing in a similar effect of two years ago. For the times of her treatment she came to Kloster Annenthal in Coesfeld. But she gladly used every opportunity to live in her community in Münster from Friday to Monday. At the end of the treatment, however, it became obvious that the cancer continued to break out anew. Slowly, she became aware of the fact that her end was approaching. So she was able to calmly accept the doctor’s words that a cure was no longer possible. Full of trust and in harmony with God and with herself, she could approach her death and in the evening of May 10, she gave her life back into God’s hands.