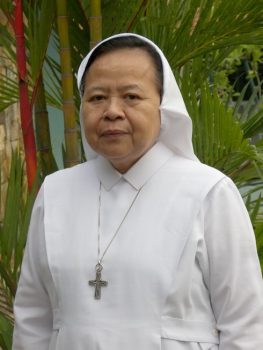 Endang Sudarti was the fourth child of Mr. Partosuwito and Mrs. Sri Wardani. She grew up in a devout Christian family. On September 26, 1965, Endang was baptized in St. Petrus Parish Church Purwosari, Solo, and on June 6, 1968, she received the Sacrament of Confirmation in the same church.

She had the wish to become a religious when she was still young, and on April 18, 1977, her dream came true. She entered our Congregation as a postulant and was invested on December 20, 1977, in Pekalongan, receiving her religious name, Sister Maria Erika.

The time of initial formation helped Sister Maria Erika develop her vocation. She enthusiastically practiced her religious life to respond to God’s call. On December 12, 1979, she made her temporary profession and was sent as a catechist to Sendang Asih community Denggung, Yogyakarta. She made her perpetual profession on May 13, 1987.

Sister Maria Erika was very creative in handicraft and decoration. This always brought joy to special events, such as Christmas and Easter and other celebrations. She ministered for 30 years in the Marganingsih Orphanage, Lasem, as local superior as well as head of the orphanage. She carried out her ministry very well and the children found in her a mother who cared for them. In July 2012 she moved to Pekalongan. Since December 2016 she was a member of the provincial council.

The Word of Jesus,”Come unto Me, all you that labour and are heavy laden, and I will give you rest”, was her strength.

On November 27, on the occasion of the 83rd anniversary of our mission in Indonesia, Sister Maria Erika invited the former children of Marganingsih orphanage. We had the thanksgiving Eucharist and then a prayer service in the cemetery where we had a ceremony of strewing flowers onto the graves of our deceased sisters.

Sister Maria Erika was participating in the Christology retreat with the other sisters in Tawangmangu. On the fourth day of the retreat, during the Eucharist, she suffered a heart attack. She was first taken to the nearby clinic and then to Brayat Minulyo Hospital in Solo. Every effort was made to help her but God had his plan for Sister Maria Erika. At 9.27 pm, Sister surrendered herself totally to our merciful Lord whom she had adored all her life. On the day of her burial, many of the former children of Marganingsih Orphanage came with their families to pay their last respects to Sister Maria Erika whom they loved.

Farewell dear Sister Maria Erika. We believe you are happy now with our Lord Jesus Christ in heaven. We still remember you as our dear Sister.