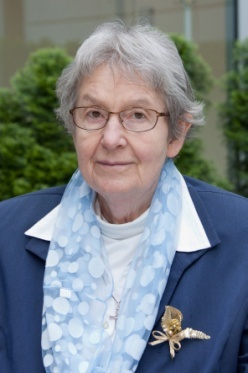 Sister Maria Edelburga, Edith Krimpmann, was born to Auguste and Karl Heinz Krimpmann in Königgrätz in the Czech Republic. Less than a year later, her brother was born. In 1945, her mother fled with her two children to Albersloh in Westphalia where her parents-in-law lived. Later, the father joined his family there. Sister Maria Edelburga spoke quite often about her experience of the flight. Later, she had the opportunity to visit her native town, which helped her to process that experience.

In Albersloh, Edith attended the basic primary and secondary school. In 1953, the family moved to Münster. Since Edith wanted to become a nursery teacher, she attended the Hildegardisschule and later the college for nursery teachers in Coesfeld. After completing her training, she entered our congregation in Coesfeld on May 18, 1963. Since her mother was diagnosed with cancer and needed help, Edith left the postulancy in February 1964. In July of that same year, her mother died. In May 1965, Edith returned to our congregation and was invested on August 3, 1965; and on May 4, 1967, she made her first profession. She felt closely connected to both her first and to her new entrance groups.

Sister Maria Edelburga ministered in various nursery schools in Lünen, Coesfeld, and Ramsdorf. From 1975 to 1977, she attended the School for Social Pedagogy in Freiburg. She loved talking about that time.

In 1988, she started her training as pastoral assistant at the Institute for Deaconry and Pastoral Services. During that time, she ministered in St. Laurentius Parish in Coesfeld. After finishing her training, she ministered in St. Pius in Münster, in Ahlen-Vorhelm, and in St. Antonius, Münster. Before ministering in the parishes, she had already started taking care of her father. He and his second wife needed more and more assistance. After finishing her ministry in the parishes, she had more time for her father, which he appreciated very much, especially after the death of his second wife. It was very hard for him when Sister Maria Edelburga was diagnosed with cancer in 2013. Her brother had been suffering from this disease for some time. She recovered from her illness, but last year in May, the illness again took a bad turn. Finally, even chemo-therapy could not help her any more.

Especially since last year, Sr. M. Edelburga had been thinking more intensively about dying. She felt the end of her life approaching, and she could talk about it. Light was an important image to her. “When I die, the light will come towards me,“ she said. Now she will live forever in this light.