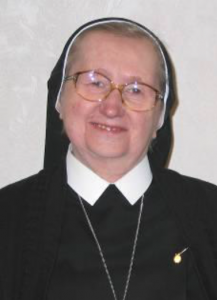 “Everything for the greater glory of God“

This motto chosen by Sr. M. Berta has now been fulfilled.

Elisabeth Pigge was born in Cloppenburg, she was the eldest of four children. After completing her eight years at the basic primary and secondary school, Elisabeth started her professional training. First she learned housekeeping at a school in Cloppenburg; there she came into contact with the Sisters of Notre Dame. She was mainly interested in nursing. She completed her theoretical and practical training by passing an exam first in pediatric nursing and a short time later one in nursing. In 1939, her professional training was completed.

During the Second World War, she could work with the Missionary Sisters of Hiltrup at the school for pediatric nursing in the castle of Schellenberg. At that time, Elisabeth’s spiritual interest emerged. Motivated by her contact with sisters, she first joined the association of charitable nurses in Germany. In 1946, she went to the Sisters of Notre Dame in Haus Vehr/Quakenbrück where she worked at the baby ward. There she made the decision to join the Sisters of Notre Dame in Mülhausen on June 1, 1949.

Now her ministry as a religious started. It included many different stations in the areas of nursing and pediatric nursing. Sister’s way led via Damme, Vestrup/Bakum, Vechta Liebfrauenhaus, the provincial center of our Italian province in Rome and the German school in Milano to Marianhain, Vechta, where she lived from 1993 on.

Sister Maria Berta loved her work, the commitment to people who needed help, whether babies, children or adults; the latter included, of course, her co-sisters. “Sharing the burdens of others“ by praying and by selflessly serving characterized her personality. Further characteristics are her great sense of humor and her sociability.

Sister Maria Berta spent the last part of her life in Marienhain, Vechta. Here her character became once again obvious. Co-sisters and staff at the infirmary experienced how she offered her help by doing the strenuous night duty for ten years (1993 through 2003) in her selfless, satisfied and always happy way.

On the morning of April 29, God spoke his Amen and took Sr. M. Berta into his heavenly kingdom where she now experiences the peace and joy of the risen Christ.