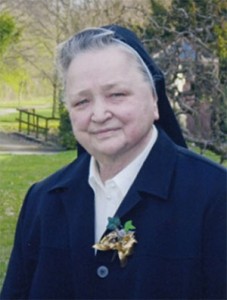 Lord, into Your hands I commend my beginning and end!
Eduard Mörike

Sister Maria Berntrud, Hedwig Menzel, was born in Bielitzfelde/Upper Silesia, now part of Poland. With her 6 brothers and 4 sisters she enjoyed a safe and carefree childhood on her parental farm. This joyful and secure life came to an abrupt end when the family was expelled and had to flee. After some months, they were able to return. But their family life was destroyed when the father was murdered by Poles in August 1945 and the mother died of hunger-typhus on October 26, 1945.

In 1946, she found refuge in a new home with the Groß-Hartmann family in Recklinghausen. After finishing school in 1950, she helped on the farm of her foster parents for three years.

In 1953, Hedwig was trained in cooking by our sisters at the children’s home in Handorf. There she decided to become a religious. In 1955, she entered our Congregation.

After her religious formation, Sr. M. Berntrud served in different places and in different ministries until 2005. She came into contact with many people and enjoyed great popularity. She greatly loved all those who were entrusted to her and she accompanied them in their life situations.

Many people will thank her for her commitment, and we are grateful for her life in our community.

Sr. M. Berntrud was grateful to many people and often expressed her gratitude. During her last days, she was physically no longer able to do this. It is surely according to her wish that we say “Thank you” for her. Thanks to her family, her co-sisters, all her friends who have accompanied her for decades, especially during her illness; thanks to her colleagues in the different ministries, especially at the Liebfrauenschule in Coesfeld, where Sr. M. Berntrud was greatly respected during her 28 years of service at the reception desk of the school; thanks to the doctors, the employees in the house, especially to those of the infirmary who have cared for Sr. M. Berntrud with great love and competence during the years of her illness.

On the evening of her mother’s death anniversary, our good God called her home to his eternal glory.