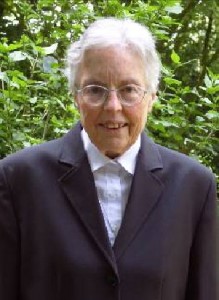 “Thou dost show me the path of life;
in thy presence there is fullness of joy, in thy right hand are pleasures for evermore.“ Ps.16:11

Sister Maria Adelgert was born as the second of five children in a traditionally protestant family – the first-born child died at the age of six months. Being the oldest and due to the difficult circumstances at that time, she developed a strong sense of duty and feeling of responsibility which characterized her all her life. Her father was a lawyer who began a military career in 1934. From then until 1941, the family had to move almost every year because of his professional transfers.

In April 1945, the mother fled with her four children across Mecklenburg-West Pomerania to the western front before Schwerin. After many intermediate stops, they finally met with several relatives in Münster in November 1945. Only much later did they receive some information that the father was still alive. He had been taken prisoner by the Russians at the eastern front and was released in 1955 in connection with the “Adenauer-Amnestie“.

Sr. M. Adelgert said that thanks to her mother they had never lost their joy of life in spite of those difficult circumstances. Her mother, who had taken care alone of her four children for 15 years, had apparently never lost her courage but had always maintained her joy of life. In the following years, Sr. M. Adelgert studied nursing and then became a social worker at the Wohlfahrtsschule in Münster. At that school she came into contact with Catholics; she met people who deeply impressed her. Guided by Heinrich Spaeman and after thorough discernment, she converted to the Catholic Church in 1952.

In 1969, her gratitude for her faith and her strong social commitment led her to our congregation that she had gotten to know through some sisters in Handorf. Sr. M. Adelgert was later able to finish her high school education, she then studied philosophy, German, and psychology in Münster and from 1974 to 1986 she ministered at St. Michael high school in Ahlen as a teacher and consultant. There she left deep impressions by her professional expertise and cultural openness as well as by her kindness, engagement and down-to-earth faith.

During the following nine years, she led the Coesfeld Province until 1995. Her vigour and vision helped her to tackle the tasks set by the General Chapters to renew religious life. Her rich experience of life, her persuasive power, her trust in God, and her co-sisters also supported her during these years. She was open to advice and criticism and she had the courage to ask for forgiveness. In spite of many challenges, she always enjoyed singing and music.

When her term ended, Sr. M. Adelgert started a very active retirement, which began in Münster. From 1998 to 2008, she was actively involved in the council of the campaign “Erlaßjahr 2000“. In 2008, she was transferred again to the convent in Ahlen, whose local superior she had already been since 2001 while living in Münster. In 2011, she moved to Kloster Annenthal in Coesfeld. From 2009 until her death, she was the contact person for people who had been affected by abuse in our institutions. She conversed with them and referred them for professional help when necessary. Her understanding listening provided reconciliation and new courage to face life.

Sr. M. Adelgert died at night without any previous indication. She peacefully slipped away during her sleep. But her sudden death has deeply shocked us. We are grateful for her life among us and we believe that she has now found life in abundance in the presence of God.