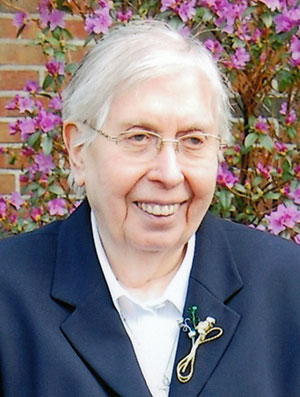 This psalm verse was Sister Luise Maria’s motto in life. She was confident that God accompanied her.

Sister Luise Maria was the youngest child of Anna and Heinrich Otten. Eight brothers and three sisters belonged to her large family. Her brother Hermann was a priest in the diocese of Osnabrück. All her siblings went home to God before her. Until the end of her life, she stayed in close contact with her nieces and nephews and their families.

After graduating from school, Luise worked on her parents’ farm until the age of 19. Then she was sent to our sisters in Meppen to learn housekeeping for one year. There she became aware of her vocation as a Sister of Notre Dame.

On April 3, 1951, she was invested in Ahlen and received the name Sister Maria Heimrade – later she chose to go back to her baptismal name and was called Sister Luise Maria.

In Paderborn, she was given the possibility of completing her formation in home economics. She then was responsible for the well-being of the sisters and the children in Haus Meeresstern on the island of Wangerooge and in St. Vincenzhaus in Cloppenburg. For more than 20 years she was in charge of the kitchen in many houses of our congregation.

From 1989 on, she ministered as sacristan in St. Willehad parish on the island of Wangerooge, a time of great importance and fulfillment for her. She loved sharing about this time, especially about the collaboration marked by mutual esteem. She knew how to fulfill the wishes and needs of the respective priests and the different pastoral teams during the holyday seasons. No effort was too much for her. For example, when little children wanted to be servers and there were no small enough “vestments“, she spontaneously sewed some.

A special event during this time was a pilgrimage to Santiago de Compostela, which she remembered with great joy.

In 2000, she was taken ill with breast cancer, however, after a lengthy treatment she could return to her beloved island and continue her ministry until 2007. Then she retired and was transferred to Kloster Marienhain in Vechta.

During the last year, she had several health problems and at the end of the year, she even had to stay in the hospital for some time. In February 2014, she came to our infirmary. Another period in the hospital three weeks ago was not able to improve her physical condition.

In the early morning of July 22, 2014, her earthly life ended. Trusting in our good God, who had accompanied her all her life, she went on her final journey to our eternal home.