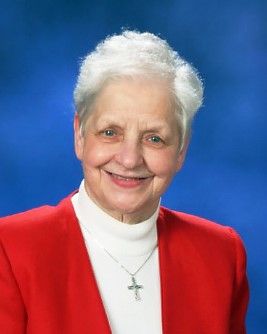 Before they met, Charles Olesky and Nellie Dominikowski Kowalski both lost their spouses during the flu epidemic of 1918. Once they met and were married, five children made up their blended family. Over the years, eight more children were born; Hedy was the second youngest. In 1943 the family moved to Youngstown, Ohio, where, as a fifth grader, Hedy first attended a Catholic school and became acquainted with the Sisters of Notre Dame. She thoroughly enjoyed her growing up days, learning and playing with her siblings and many friends. And throughout life, she was always proud of her Polish heritage! After graduation from St. Joseph elementary school, Hedy was accepted as an aspirant and began high school at Notre Dame Academy in Cleveland. She entered as a postulant on February 2, 1951. At investment, she received the name Sister Mary Claudia.

After profession in 1953, Sister began her career as a primary grade teacher. In 1966 she earned a bachelor’s degree in education from St. John College in Cleveland, attending classes on Saturdays and during the summer. An excellent, creative teacher, Sister Mary Claudia was frequently called upon to mentor beginning teachers, guiding and encouraging them to be the best. She loved the little children and considered it a privilege to prepare them for the reception of the sacraments. She possessed a natural charm and brought joy to many.

In June of 1982, due to health issues and the need to care for her mother and siblings, Sister Mary Claudia requested a dispensation from her vows. While being devoted to her family, Hedy continued to teach the primary grades. In 1991 she was asked to assume the role of Director of Religious Education. She resumed her studies, earning a Master of Pastoral Studies degree from Loyola University in New Orleans, Louisiana. During these years, Hedy began to visit and volunteer in the Health Care Center in Chardon. She renewed acquaintances and became interested in the Associate relationship, making her Associate Covenant in 2001. Her love for the sisters and the congregation prompted her to seek readmission to the Sisters of Notre Dame. In many ways, she had been living the mission and spirit of the community and had a sense that she had “never really left.”

Sister Hedy Marie professed her vows on July 29, 2006. As a pastoral care volunteer, she was committed to being a compassionate and contributing community member, especially for the sisters in the Health Care Center. Her creative and artistic talents were great assets as she assisted with activities; she was well-known for buckeye candy and baking delicious pizzelles. She loved the sisters and was dedicated to their total well-being. Her presence, kindness and active involvement were gifts. In 2018, with the onset of dementia which progressed rapidly, Sister Hedy Marie moved to Notre Dame Village Assisted Living to benefit from more specialized care. She moved back to the Health Care Center this past August. May Sister Hedy Marie, who loved Jesus, little children, her family and her sisters, be embraced by our loving God for all eternity.