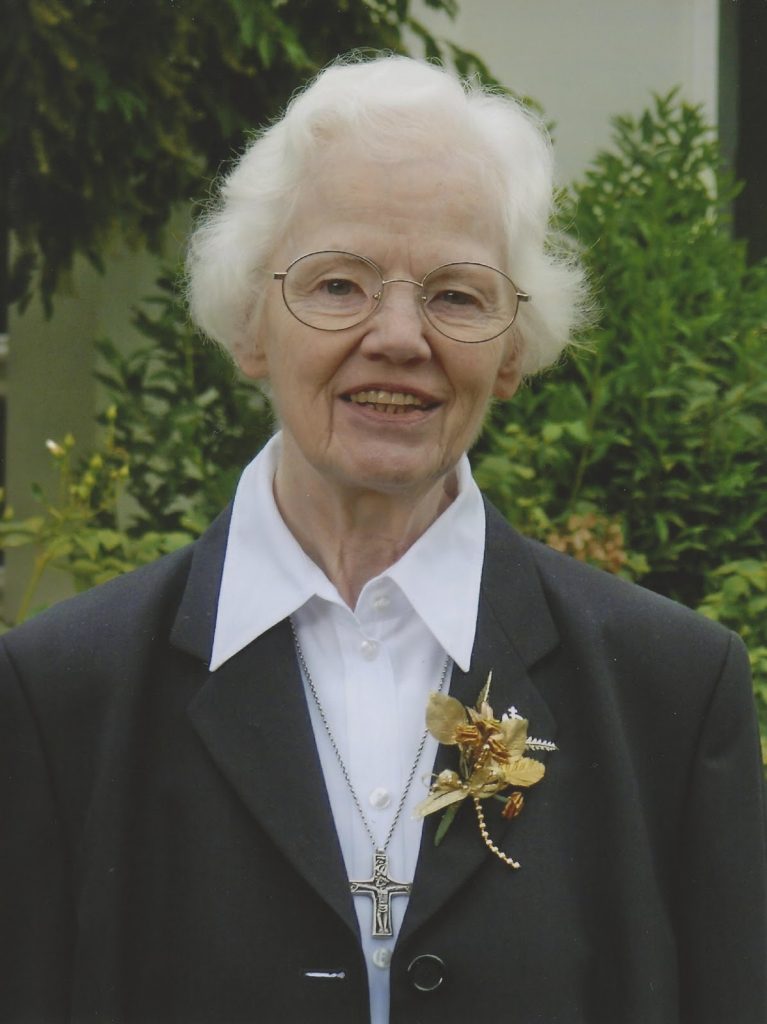 Psalm 131 could have been the melody of life of Sr. Erika Maria. With its three verses, it is the shortest of the 150 psalm songs. Similarly, Sr. Erika Maria has never made much fuss about herself, about her often thwarted life path, or about her great talents. The psalm describes a soul connected with God, quietly resting in Him, and consoled by Him. That corresponds to Sr. Erika Maria‘s experience as she grew up in a family where she was well protected. This marked her relationship with God and her positive, kind attitude towards all whom she met: her co-sisters, her colleagues, and her students.

Since her father worked in the planning team of the expansion of the railway network in Germany and in the territories occupied by Hitler, the family often had to move. Erika was born in Stettin and attended school in Berlin, Pomerania, Mecklenburg and Lower Saxony. Whereas her elder siblings directly suffered the hardships of the Second World War – her brother in the military service and her sister in other services – Erika could survive the turmoil of the Hitler era in spite of flight, hunger, bomb nights, and the terror of the Hitler dictatorship because she was relatively well protected “under her mother’s wings”. Her mother taught her the love of a cultivated language. So Sr. Erika often delighted us with treasures from her rich repertoire of poems and aphorisms learnt by heart. From her father she may have learned her tendency to fine humor, art, and play. Her family practiced a large repertoire of customs to delight and encourage each other. Joint hikes and trips awakened in Erika a great love for nature and for the little beauties along the way.

After the great strains of the flight from the troops of the Soviet Union, the Matz family found a new home in Wuppertal-Elberfeld. Erika decided to start a formation as kindergarten teacher and after-school tutor and that is how she got into contact with the congregation of the Sisters of Notre Dame. After entering, she was given the opportunity to catch up on her high school diploma. After receiving her master’s degree in English, German, and biology at the University in Münster, Sister Erika Maria taught at St. Joseph High School in Rheinbach for 24 years. For many years, she was also deputy principal. Her co-sisters and colleagues appreciated her expertise and her commitment, her reliability and her kind openness for the personal matters of colleagues and students, as it is written in the psalm, “not proud, not haughty…”

After her retirement in 1998, Sr. Erika Maria moved to the community of the Liebfrauenschule in Cologne. Besides many other little tasks, she administered and put a new order in the extensive school library. – Because of her great competence in the German and the English language, the then superior general called Sr. Erika Maria to help revising the new German version of our Constitutions. On that occasion, her deep spirituality became obvious again.

In 2015, Sr. Erika Maria decided in her usual attitude of serenity and trust in God to move to Haus Salus, our retirement home for sisters in Mülhausen. Here, too, she let her soul be “calmed and quieted“ as she enjoyed the little things of everyday life and of nature, “hoping in the Lord” who called her home to eternal life with Him on 31 January 2021.