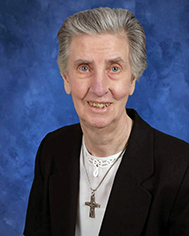 As the second youngest of eight siblings, Madeline quickly learned the art of working together, sharing and helping one another. Already as a youngster, she developed the high standards for herself that never wavered throughout her life. Her Italian born parents, Nicola and Nancy (DeNicola) Columbro, added the study of music to her academic and religious education. Madeline was gifted in and loved music, joining the choir at Holy Rosary Parish, Cleveland, and becoming assistant organist by the time she began high school at Notre Dame Academy, Cleveland. Madeline wrote, “It was here that I began to learn the full meaning and value of life, of a religious vocation, spiritual development and integration.” After a time of discernment, Madeline accepted the call to “total consecration and integral living” and entered the Sisters of Notre Dame on September 8, 1951. At investment, she received the name Sister Mary Electa. She later returned to her baptismal name and became Sister Madeline Mary.

Sister earned a bachelor’s degree from Notre Dame College, South Euclid, and began her ministry in education, teaching high school for nine years before returning to the College for the next twenty-five years. During this time, Sister Madeline Mary earned a Master’s in Musicology from the Catholic University of America in Washington, DC, and a Doctorate, also in Musicology, from Case Western Reserve University, Cleveland. She was a genuine, dignified woman with no pretense and a wry wit and sense of humor. She held her students to the same high standards she had set for herself, focusing on their professional competence, while at the same time keeping their best interests at heart. As Director of the Lifelong Learning Center and then as Academic Dean, Sister took pride in her students’ accomplishments and believed that each person had the ability to make a difference in the world.

From 1988-1991, Sister Madeline Mary ministered at the Notre Dame Generalate in Rome doing research for a Congregational Brochure and teaching music and liturgy at the North American College. Back in the United States, Sister served as Director of Spiritual Development at Bergamo Center in Dayton, and was a highly respected member of the Executive Board of the United Way and the Board of Managers for the Rainey Institute, both in Cleveland. For ten years Sister served in the Notre Dame Advancement Office as well as being responsible for music and liturgy in the provincial center. From 2009-2011 Sister Madeline returned to Rome as a musician and liturgist for the motherhouse. Upon her return, she continued in music ministry and applied her exactness and organizational skills in the Archives until March 2016. During the past two years, her prayer, presence and suffering became expressions of her complete gift of herself to God.

Sister Madeline Mary’s greatest accomplishment came neither from her teaching nor her playing. Rather, her finest composition was the person she became through the circumstances of her life. In so ardently teaching others to love music, she came to embody her deep conviction that “God gave us music that we might pray without words.” May Sister rejoice in the fulfillment of her quest, “It is now no longer I who live, but Christ lives in me.”